Inside the Colourful Mind of Wes Cockx 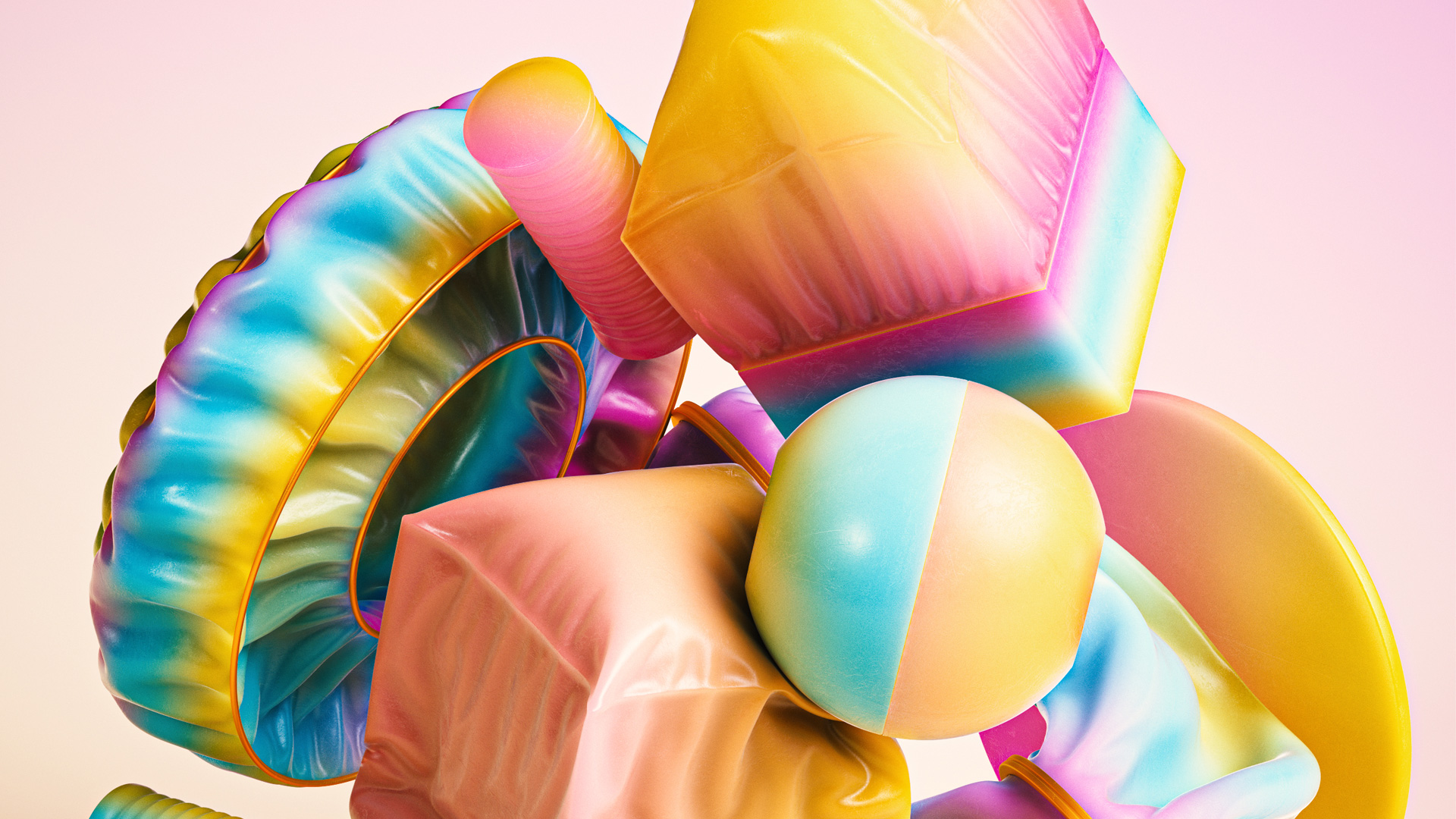 From discovering 3D design to making the jump to as a freelancer, Wes Cockx recalls the defining moments of his journey as a digital artist.

There are no rules when it comes to the colourful designs of Wes Cockx. In both his personal explorations and client work, the Belgian artist has made a name for himself with his intricate creations that blend typography, illustration and motion graphics.

While his animations are especially pleasing on the eye with playful, fun and experimental elements, it’s the meticulous attention to detail that really shines through. Take a hard look at any of his renderings and you’ll notice a subtle sense of depth, alongside detailed materials and lighting. Although these small details are often overlooked, they're something that Wes takes great pride in creating. “It looks like the material is real plastic or metal,” he says softly. “It will have some scratches or fingerprints on there. It’s the imperfections that make the difference.”

Wes, however, isn’t trying to recreate the world he sees around him. While he admires the immense skill required to create lifelike renderings that can fool someone into thinking they're a photograph, he believes that the power of 3D lies in its ability to distort reality. “Otherwise, why not just take a picture?” he asks.

Instead, the Belgian designer combines these complex details with the rules of his own reality. His gravity-defying animations often feature massive structures balancing on small objects, or warped landscapes that provide a glimpse into a new universe he’s created. It’s partly what makes Wes’ work so unique – that he’s able to push the laws of physics and masterfully find the middle ground between what’s real and what isn’t. “That’s a nice balance I like to keep,” he smiles.

Outfitted with his unique design sensibilities, Wes’ diverse range of clients now spans the likes of Absolut Vodka, Nike, Range Rover, Jean Paul Gauthier, Pepsi and TomorrowLand. Throughout all these projects, the Belgian illustrator mixes styles that draw from a wide range of influences, including pop culture, street fashion and music. The last one is especially important, as before he even discovered 3D, Wes himself played in a band for many years. In fact, it was this passion for music that led him to stumble into the world of design in the first place.

When the band began to land their first gigs and needed fliers to promote the concerts around town, Wes took it upon himself to create them. “I honestly think I did my first few posters in Paint,” he laughs. “I’m not even going to call them designs.” The quality of these concert fliers might pale in comparison to the work he puts out today, but he enjoyed creating them all the same and it piqued his interest just enough that he decided to study graphic design.

He eventually began working at a big-time advertising agency in New York. “When I started there, I hadn’t even used Cinema 4D or any 3D program,” he says. “I was mostly using Adobe Illustrator and Photoshop.” Wes enjoyed working in an agency setting and, with a special focus on typography and illustration, he was improving as a designer with each passing day.

Soon, he began to notice that advertising was moving heavily towards 3D design. “I started seeing typography pieces in 3D,” Wes recalls. At the same time, he felt that he was approaching a creative limit in Illustrator and saw the opportunity to take his typography designs to the next level using 3D. So he began to ask around and eventually got his hands on Cinema 4D. “I just started messing around with it with no idea what I was doing,” he says. While still working at the agency by day, Wes spent his evenings and weekends learning through online tutorials and posting his creations on his Instagram page. As he began to understand the capabilities of CGI, he also saw how it could elevate his own work.

As he became more familiar with the software, he also began to take freelance projects on the side. At first, it was the odd 3D animation here and there, but as Wes grew his online presence, the client work began rolling in. There was one project after another – and soon he began to seriously consider jumping into the freelance world full-time. It wasn’t an easy decision to make and Wes was very hesitant at first. Eventually it reached a point where he was pretty much working two full-time jobs.

The turning point came in the form of a once-in-a-lifetime project for Disney, who wanted to hire Wes on a full-time basis for a two-month project. After some initial hesitation, he realized he had no other choice and decided to take the leap and leave the agency – a defining moment in his career. “In the worst case scenario, I’ll just be looking for a job in six months.” Although he was uncertain, at least he would have given it a shot and not looked back to regret it.

“Everybody, no matter who you are, started somewhere at some point and had no idea what they were doing."

“Looking back, I should have quit my job a year before I did,” he reflects. “But I was just too afraid to make the jump.” Although now it may seem like an obvious decision, Wes doesn’t speak on this with any regrets. He believes that mistakes, both on a personal and professional level, are necessary for growth – and he wouldn’t be here today without them. However, his unrelenting dedication to his craft and “a bit of luck” have allowed him to continue building momentum long after the completion of the project for Disney – and clients have been lining up ever since.

Even now as an established 3D illustrator, Wes continues to refine his craft and his Instagram is perhaps a living example of that. “It’s like you can see your own progress,” he says. Looking back a few years, he’s embarrassed that the work doesn’t live up to today’s standards, but at the end of the day, it tells the story of his growth as a digital artist. “Everybody, no matter who you are, started somewhere at some point and had no idea what they were doing,” he adds.

Perhaps more importantly, Wes has learned that his personal projects and client work have been equally crucial in his continued overall success. He’s spent countless hours developing his own unique style and visual philosophy for the world to see – and it plays a large role in the clients he attracts. “That’s what motivates me to continue doing personal work,” says Wes. “When clients come to me for commercial work, they use a lot of references from things I’ve posted on Instagram.”

For Wes, this intertwining of personal and client work is a win-win. His interest in 3D stems from his passion for design and it’s something he loves to do, but at the same time, his Instagram presence has helped him to establish a visual identity for the world to see.

While he loves the path he’s chosen, Wes admits that it’s sometimes bogged down by the legal, financial and administrative tasks associated with an artistic career. From invoicing and budgets to licensing, he finds himself constantly repeating himself when dealing with a new prospective client. “It’s always just a hassle to constantly go back and forth,” he says candidly. “Sometimes just to find out there isn’t any budget.” He would frequently put tons of time and effort into personalized quotes, only to not even receive a simple response in return.

With AvantForm, Wes is able to upload his work and control his pricing and licensing options. By having this set-up beforehand, he’s able to cut down on the initial back-and-forth and avoid dead-end licensing requests. Instead of jumping through hoops for each inquiry, potential clients can simply scroll through his profile, which already has all the essential information waiting. He thinks of his AvantForm page as a shoppable portfolio, where prospective clients can license his images and animations with the simple click of a button.

Ultimately, Wes remains the same laid-back and soft-spoken person he was when he first began his career. His underlying passion for design remains, but one thing he’s beginning to embrace is a healthy work-life balance and time off between projects. “Sometimes it’s nice to just not work for a week,” he says. “I feel very balanced out nowadays.”

The Belgian designer understands that each stage along the way is equally important. There isn’t a need to skip any steps along the way. He has some big-time client projects on the way, but his eyes remain fixed on the bigger picture. Wes loves what he does. He’s able to express himself through his colourful illustrations  – on both a personal and commercial level – and make a living while doing so. Isn’t that the goal of every artist who’s ever decided to take the leap?