Step Inside the 3D Universe of Eugene Golovanchuk 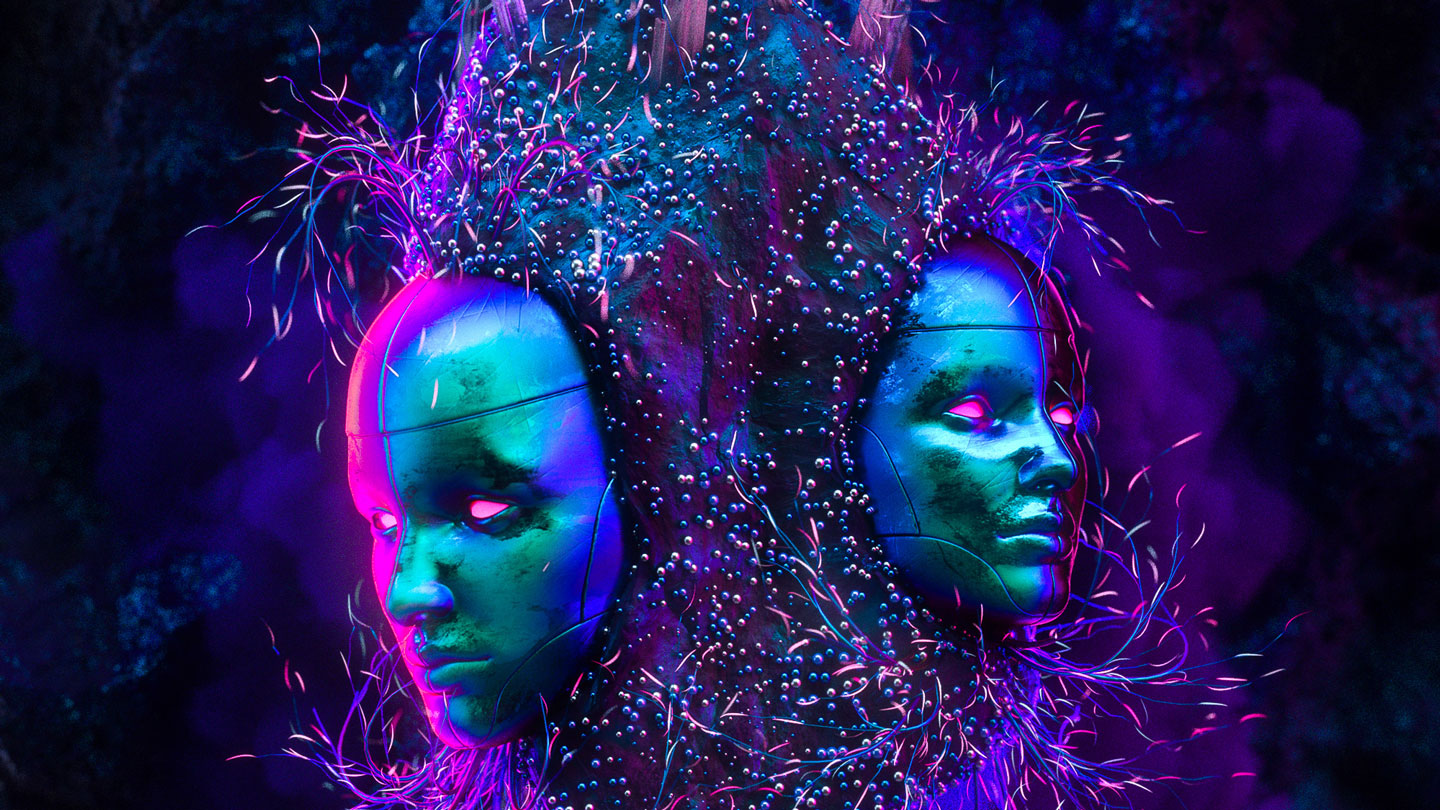 From trained lawyer to 3D digital artist, Eugene Golovanchuk shares the highs and lows of his journey – and reflects on the things that matter most.

Eugene Golovanchuk, also known as Skeeva, is the Ukraine-based 3D concept artist whose “dark surrealism and cyberpunk flair” has been turning heads since he burst onto the scene a few years ago. Often eliciting a gloomy and mysterious mood, his imaginative work incorporates comprehensive sci-fi and fantasy elements that encompass huge universes and backstories behind the visuals.

His rising success as a digital artist is highlighted by everything from his dystopian-inspired Shapeshifter series, which draws upon human-like AI robots replacing people in society, to his wide range of collaborations that spans SpaceX, Allegorithmic, the PNL music duo and Heineken. Through it all, however, Eugene brings his futuristic style and extraterrestrial characters to everything he does.

As a self-taught art director and digital designer, Eugene has a natural inclination for trial and error. So much so that he refers to himself as a ‘3D Experimentalist’ for his constant digital testing and visual tinkering. In fact, the artwork that he continues to produce today is nothing more than a confluent mixture of the different tools and knowledge he’s used to forge his own stylistic stamp. “When I’m creating stuff, I don’t normally have a brief beforehand,” says Eugene. “I’m just experimenting and looking for a happy accident.”

Eugene’s success didn’t happen overnight. It’s been a long and winding journey marked by heaps of growth – both personal and professional – with plenty of lessons learned along the way. His resume now includes an extensive amount of professional experience in creating concepts and 3D assets for AAA games, movies, digital ads and album covers. Just a few years ago, however, Eugene was attending law school and unsure about what he wanted in life.

He only stumbled across the world of 3D art and design later when he was working in call support for a gaming company. Eugene saw it as something that was far more accessible than other disciplines and he began teaching himself the fundamentals on the side through YouTube videos and online tutorials. “I don’t have any art or design education,” he says. “I didn’t know how to draw or anything like that.”

Through consistent improvement, Eugene eventually decided to take the leap and transition to 3D design full-time. “I had to grow as a person,” he recalls thinking. “Everyone is afraid to leave his or her comfort zone.” His wife was pregnant at the time and leaving a stable job and salary in pursuit of his creative ambitions wasn’t exactly an easy choice to explain. Ultimately, however, he knew he wasn’t where he wanted to be. “I risked everything,” he admits. “But I was following my dream and, at the time, it was a pretty romantic idea.”

While the Kiev-based artist was filled with lots of optimism early on, the journey didn’t come without its share of hurdles. After a couple of potential Art Director gigs didn’t pan out and a bit of financial redirection, Eugene began to run into some self-doubt. But he remembers a tipping point that came from within. “As long as you truly want something, there’s something inside you that will make it happen for sure,” he explains.

Wanting to continue his momentum, Eugene decided to partake in a self-challenging series of projects he dubbed the Everyday Renders marathon, where, for 365 consecutive days, he completed one 3D design and uploaded it to social media. Armed with a creative spirit and can-do attitude, Eugene’s online profile grew rapidly during this period and Instagram became a driving force behind much of his early success.

"I was hunting for those likes and trying to create things that would blow up on social media. But now I’m at this stage where you just have to trust yourself."

He stopped the project after a year. “I’m still trying to be as consistent as possible,” he says. “But I’m now focusing more on detailed artwork and trying to put 80 or 100 hours into one piece.” While the Everyday Renders marathon undoubtedly played a large role in his international rise and artistic progress, Eugene now finds himself in a different stage in his life and career. “For me personally, I don’t care much about the likes and comments anymore,” he explains. “To be frank, a year ago, I was hunting for those likes and trying to create things that would blow up on social media. But now I’m at this stage where you just have to trust yourself.”

Eugene finds himself at a point where he’s more mature, secure and confident in what he brings to the table as an artist. He’s put in a lot of effort into refining his craft and now enjoys an established reputation on an international level. As a result, he’s learning to focus on life and trying not to get wrapped up in the small details, but rather keep chipping away towards his long-term goals – and AvantForm presented him the perfect opportunity to do so.

In an effort to maintain an overall sense of well-being, Eugene looks to the platform to manage some of the burden that comes as a 3D artist. He doesn’t want to have to jump through hoops for clients with licensing agreements, back-and-forth communication and contract negotiations. Instead, he can keep his focus on the things that matter – his craft and personal life. “I made a promise to myself that this year is going to be very proactive for me,” he says firmly. “I want to invest my time and energy. I want to spend every minute of my life being useful for something or someone, and to be balanced.”

Beyond simply easing his workload, Eugene also sees AvantForm as something that can help him elevate his artwork. “It’s funny when you’re at a party and someone asks what you do,” Eugene laughs. “This is the hardest part.” Whether he’s at his own exhibitions in Kiev or surrounded by his own friends, describing his artwork is something that really makes him think – and sometimes dreads.

But it posed a real question – how do you describe your work to a potential client? The world of 3D design is abstract by nature and far more complex and subjective than stock photography, which is easier to categorize. “AvantForm is a great experience to describe your artwork,” he says. “I was so pleased to fill out the descriptions.” It’s the little things, such as the added human touch of being able to break down and describe your artwork with the world – clients or artists – in his own words. “To share knowledge in this way is something new to me.”

“It’s not about selling art and making money. It’s about creating a strong and confident community,”

Since Eugene has stopped his Everyday Renders project, this also goes hand-in-hand with his conscious effort to shift from quantity to quality. He’s focused on taking a step forward as an artist and elevating the depth of his overall presence – and AvantForm affords him the opportunity to do so.

One of the hallmarks of AvantForm is its everlasting commitment to quality with a handpicked selection of artists. While this certainly maintains a catalogue high-value artwork, Eugene understands that it’s more about inclusion. “Every artist inside this circle loves the artwork from other artists,” he says. “It’s like a close community in a way. We’re trying to build something and show the digital art world that we’re building right now.”

This tight knit sense of community lies at the core of AvantForm – and it’s something that Eugene really values. “It’s not about selling art and making money. It’s about creating a strong and confident community,” he says. “We’re able to share and solve problems together, learn and grow together.” Digital 3D design is a new wave of artwork that’s currently being ushered in – and you can’t help but feel that Eugene is certainly happy to be part of it. He has a drive to extend his contributions to the artists around him and this platform changes the way in which we can connect with different artists and clients.

It’s been an eventful ride for Eugene and he’s picked up a lot of knowledge and wisdom along the way. He would still consider a dream offer to work in the U.S. or London, but he’s doing his best to live in the moment and appreciate the good around him. “I’m not the kind of guy to plan my whole life,” he says. “I have everything right now. I have a car, I have an apartment, I have my dog, my son and my wife. I’m happy.” And when you consider the highs and lows of Eugene’s journey, there’s something we can all probably take away from that.