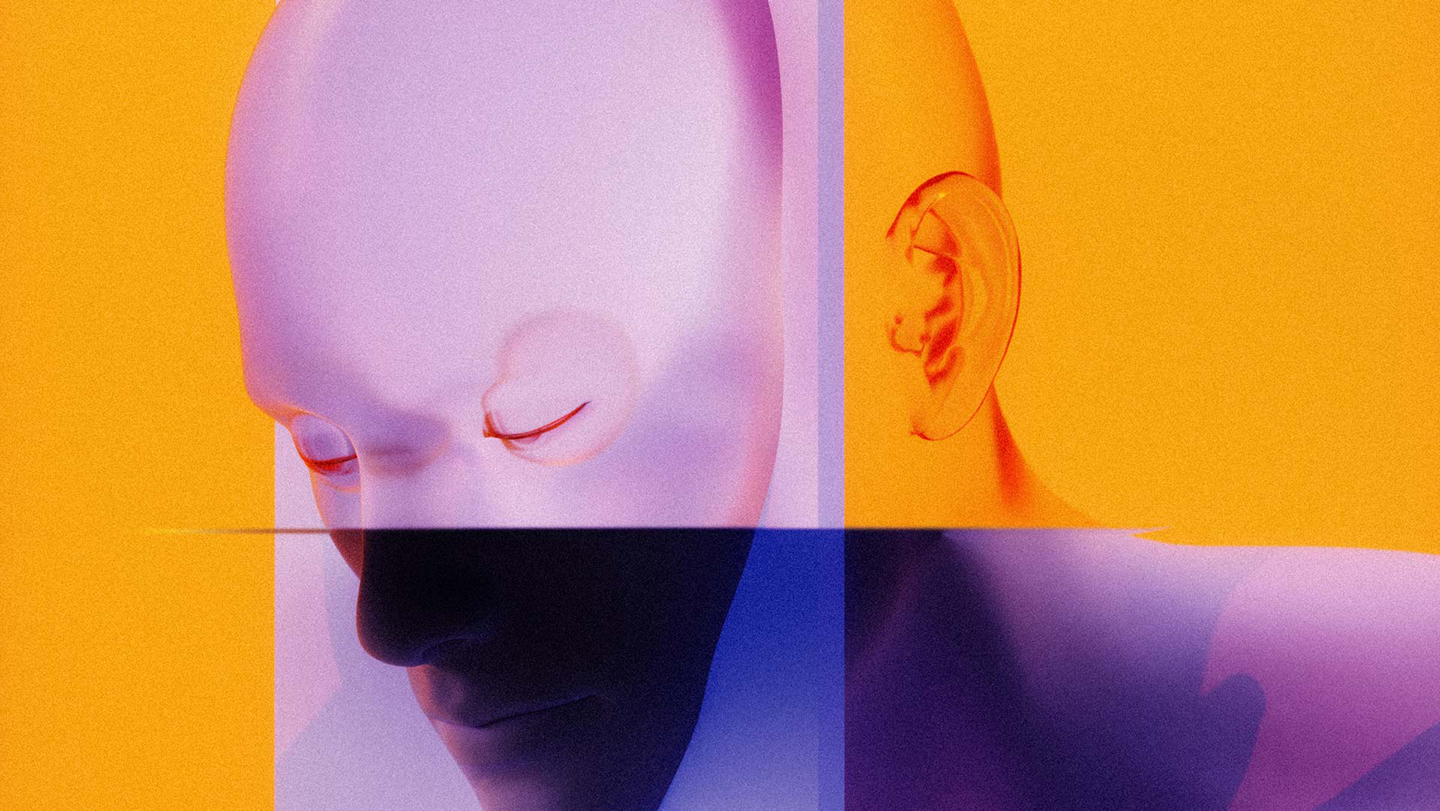 Between school, his indie band and digital art, the multi-talented Alexy Préfontaine breaks down how he keeps everything moving along.

Alexy Préfontaine is a Montreal-based 3D illustrator whose surreal work blends otherworldly landscapes and mystifying digital portraiture. His stripped-down aesthetic is emphasized by an emblematic colour palette with soft shades of blue, pink, orange and purple. The 24-year-old digital artist is inspired by all-things related to nature, space and geometry – and his dream-like designs often leave us with a different perception of the world around us.

While his eye-popping artwork certainly captures your attention, it’s the atmospheric mood and emotional depth that keeps viewers hooked. “It’s kind of hard to pinpoint where the inspiration comes from,” says Alexy. “When I create something, I feel like it has to convey some sort of feeling.” This intimate ambiance is especially felt within the futuristic space-inspired silhouettes that he brings to life. “Each character has its own vibe and story,” he explains. “Some elements are used more than once but they all have something different.”

Take his popular Weary series as an example. Partly the result of a late night lighting accident in Cinema 4D, the collection of illustrations showcases Alexy’s minimalistic use of a 3D human model and the melting pot of colours, balance and emotion we’ve come to associate his unique visual style with. The series also demonstrates his fascination for abstract poses, which only add another layer to the already-intricate silhouettes. “It might be a bit cliché, but there’s a part of me in each of these characters,” he adds.

“When I first started out, I was doing it for fun,” says Alexy. “I was an engineering student. It kind of changed my whole life out of nowhere.”

Alexy’s origins in the 3D realm are just as organic as his creations, when he stumbled across various mobile editing apps a few years back. Without any previous art training or visual knowledge, the then 19-year-old began diving into digital art directly from his phone. The first thing he created was album artwork for his own band, Alpha & the Van, inspired by some of his own favourite musicians.

Over time, Alexy gradually improved to the point where he felt confident enough to share his creations on Instagram under the moniker Aeforia. At first, he thought of social media as nothing more than a visual journal for his progress, a tool that allowed him to share connect with similar artists. “That’s pretty much how it all started,” he says.

It didn’t take long for his newfound interest to blossom into a full-blown passion. He shifted his focus from mobile editing to professional-grade desktop programs and really began to invest in his craft. Before he knew it, Alexy was racking up tons of social media buzz, leading the young artist to completely change the trajectory of his future. “When I first started out, I was doing it for fun,” says Alexy. “I was an engineering student. It kind of changed my whole life out of nowhere.”

At this point, Alexy had virtually no professional background or past exhibitions to lean on. He began to think of social media as his “storefront” to display his growing collection of digital artwork to the world. “I wasn’t sure about what I was doing because it was all brand new to me,” he recalls. “It turned out to be such a big part for me.” So much so, that he’s now attending art school in Montreal.

It would be easy for a self-taught artist to scoff at the idea of formal training, especially if they’ve already had a taste of success. But Alexy looks at it differently. Instead, circling back to the basics has given him a fresh perspective on his existing workflow. Even little things, such as physically drawing on paper, have allowed him to expand his horizons as a digital artist. “It got me out of my comfort zone,” explains Alexy. “Even though it might not be worthy to share on my page, it’s so different. Just trying to communicate an idea in a different way than you’re used to.” Now in his final year of studies, you can’t help but get the sense he’s only evolving as an artist with each passing day.

While he understands the important role that social media has played in his success, he’s now consciously trying to shift the focus away from the numbers. Sometimes he has to remind himself how far he’s come in such a short period of time. “I haven’t even graduated yet, right?” he exclaims. “I’m doing work that I never thought I would and there are people out there who love my work.” At some point, he’s just proud that his illustrations are resonating with so many – no matter how big or small the social media engagement may be.

Alexy is well on his way. He’s young and has his whole life ahead of him. He’s enjoying the entire journey – school, art, music and all. That isn’t to say he’s not dedicated to his illustrations, but his indie band, school and other crafts do take up valuable time and resources for the multi-talented artist. After all, client work is something that “just kind of happened” to him without actively searching.

Part of the allure of work under Aeforia is that he can manage his time and run his life the way he wants to. However, having his own business doesn’t come without challenges for a student who’s still transitioning to full-time client work. There’s a learning curve that comes with the non-creative tasks associated with any artistic career. The non-negotiable, and sometimes inglorious, realities, such as legal contracts, pricing and negotiation. It’s something that’s only multiplying in complexity as he grows his brand. For someone like Alexy, who’s already juggling the trials of his musical pursuits, schooling and a social life, AvantForm provides a functional platform that lets him flourish from all angles.

“Licensing has always been and still is something scary,” he says. “They don’t teach you that in school.”

Using AvantForm, he’s able to make a full-time living while focusing on his craft. The platform eases his technical burden and he’s able to easily maneuver the business side of things while maintaining control. For Alexy, this means he’s able to focus on the artistic side of things – the part that got him this far in the first place – and frees him up for any other pursuits.

When he was just starting out, he admits he didn’t even understand the value of his own designs. “The first artwork that I licensed was for like fifty bucks,” he laughs. “It was album artwork for a music producer off SoundCloud.” He was certainly over the moon at the time and it certainly represented a monumental step forward, but he quickly found himself over his head with the pricing of his artwork. “Licensing has always been and still is something scary,” he says. “They don’t teach you that in school.”

He’s spent time asking his artistic mentors and university professors, but it’s mostly been learning on-the-go. “I must admit there’s a lot that I don’t know,” he adds. It’s especially difficult when you’re in a niche space. The world of digital art is smaller and less established than, say, photography, which has more practices and guidelines to follow. He wants clients to purchase his illustrations, but at the same time, he doesn’t want to cheapen the hours, effort and talent he’s put into developing his craft. “There’s no golden rule really and that’s what makes it kind of hard.”

That’s why he’s excited to have his designs on AvantForm, where he’s able to experiment with different pricing and licensing options. “Maybe an image catches momentum,” he says. “After time goes by, I can see which images or content sells more, then I’ll adjust.” In the same way Alexy is constantly tinkering as an artist, he’s also still playing around with his business model. With AvantForm, he sees the opportunity to tinker, improve and, ultimately, grow as a full-time designer.

As a freelancer, one problem that frustrates Alexy in particular is late payments. He recalls one time, where he handed in his work one week ahead of the deadline, yet the client still failed to pay the invoice on time, despite his requests. “At some point, I asked myself if I was the one being to harsh,” he says. But he invested a lot of time and resources into the project – not to mention the peace of time worrying about the late payment. “It’s a lot of pressure. I deserve to be paid on time,” he says. “What was supposed to be my biggest gig of the year could have been a disaster.”

Now, he enjoys the security of having an official entity in front himself as an artist. “It’s my shield, my fortress,” he exclaims. In the same way social media was once his storefront, AvantForm is now the place where he can send all prospective clients with all the imperative information waiting, not to mention all the new business it’ll bring. “It gives you a sense of comfort and freedom,” he says. He doesn’t even have to respond to email to complete the transaction. He could be performing a concert 2,000 kilometres away from Montreal and still selling artwork. “It cuts off so many struggles,” he says. “They are guided through the process and purchasing. It’s amazing.”

At the end of the day, Alexy is still that wonder-eyed kid with the same underlying passion for digital art. He just happens to be paid for it now. “It’s kind of surreal to be among these artists,” he says. “So many people I look up to.” Like many 24-year-olds, he’s still finding his way. Entering his final year of schooling, he’s currently in the midst of a phenomenal juggling act, but his sights are fixed on what to come. It’s a lot of pressure and there are still a lot of floating questions, but he’s not worried. Instead, Alexy is more focused on maximizing his time and enjoying the ride. “I always tell myself to be patient and keep working,” he says. “The rest will take care of itself.”