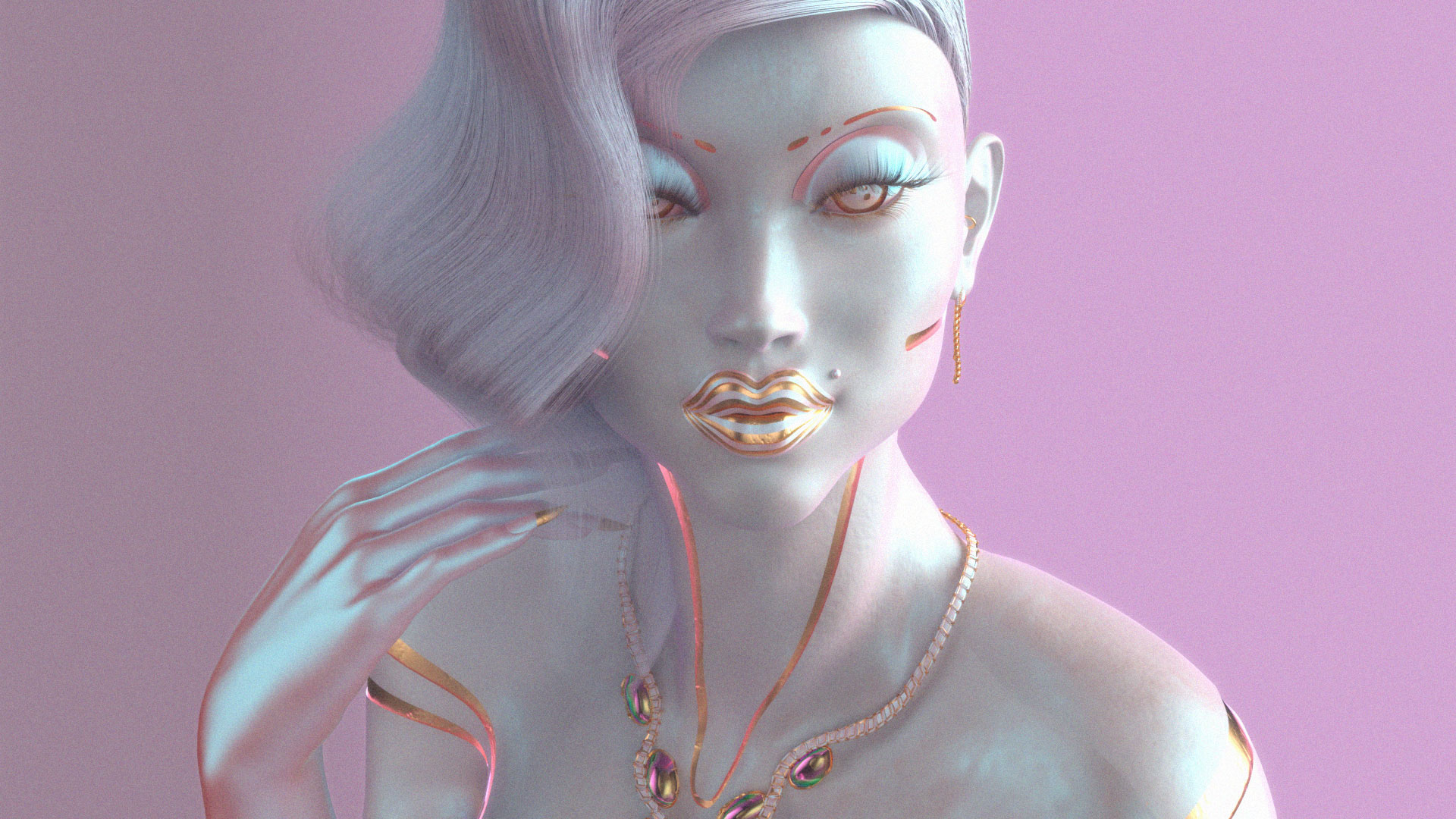 Blake Kathryn breaks down her recent digital short film, Seven Sirens, and offers a glimpse into her creative process.

Blake Kathryn has long transported viewers into otherworldly dimensions with her 3D dreamscapes and ethereal characters. Having worked with everybody from Jimmy Choo and Adidas Originals to Lil Nas X, the LA-based digital artist brings her signature palette of pastels and neons, glossy detailing and nostalgic atmosphere, which breathe life into her beautiful dreamlike compositions.

Seven Sirens is Blake's most recent project, which explores the familial bond and allure of the seven deadly sins. Blending the background of the capital vices through a retro-future lens, the digital short film further studies the characterization of each sin through Blake's unique science fiction-inspired lens. We spoke to Blake ahead of the release about what went into Seven Sirens, how she translates her subconscious feelings into concepts and some of the technical aspects of her creative process.

What was the intention behind Seven Sirens?

I've always loved infusing my work with vice-related undertones. Crafting a piece that deeply explored that has been a long-term desire and when the idea of crafting seven characters around the deadly sins clicked, I jumped on it! When thinking of the subject, to me, the temptation is paired with a Russian roulette outcome on if the pursuit will end positively or negatively. I hoped to capture this moment in limbo through each siren, who's in rapture of what's just beyond as much as the viewer is drawn in to them.

Where did the inspiration behind the short film stem from?

At the end of January during a weekend hangout, I was sketching on the couch, mulling over a frustration to create a project with more substance. One that I could build upon. Seeing that Valentine's Day was coming up, I originally planned to spend two days a deadly sin and create a cyber siren out of each, having the series of seven complete in two weeks.

In a fast-followed retrospect, this felt exactly like what I wanted to avoid – a quick study. What followed was an introduction of storyboarding, dreaming up personalities, facial details and character motions. During this early phase, I also collected assorted vintage pin-up illustrations, photoshoots and makeup stylings from the 60s to 70s. A retrofuture cyber-babe theme was born as a result of the mixture of these influences.‍

"I try to capture any and all musings when it feels there's some grain of promise in it."

How do you manage to integrate your own aesthetic into each project?

First off, thank you. I really strive to push a specific vision forward and it's soul-filling to hear when that translates. A lot of my work relies on a mix of vibrant tones or metallic sheens with soft but nuanced lighting. This specific project was no different in that regard, with colour taking a back seat to subtle iridescent metals, as I didn't want the colour profiling of each sin to read overly stereotypical.

When not working on environment-focused work, I gravitate towards the female form, the main subject of this piece. My love for that began in an oil figure painting course during college where capturing the essence of form and character was a time limited challenge. I feel a rush trying to re-capture that practice each time.

‍How do you translate your feelings, ideas or concepts into art?

It's a lot of scrappy sketches and jotted notes. I try to capture any and all musings when it feels there's some grain of promise in it. Over the years, that creates an ongoing list of concepts that can be re-visited or explored when the time is right. Between my sketchbooks and disorganized notes app I've been able to improve upon these ideas and influence future works. Knowing the narrative or emotional core up front and in great detail allows me to consider how it affects the full spectrum of my actual medium when I dive in – palette, lighting, framing, the list goes on.‍

Did you run into any technical challenges during this project?

I designed the character Envy like four times. I'm literally answering these questions while finalizing her because apparently she doesn't want this short to see the light of day. My main mantra while creating this was that when things don't work, I won't force it and that was only possible due to the lack of an urgent schedule. I began on February 1st, took nearly a full month off due to client work and COVID-19 disruptions, and then finalized about two weeks back into the swing of things in April. That also blessed me with going back and refining during these hiccups with fresh eyes and a further-in-process perspective.

Outside of trying to be kind to my creative process, on a technical level I delved into Marvelous Designer's animation areas and Daz3d's D-force simulations for a couple characters, which continues to be quite outside of my comfort zone. I'm also fresh to doing hair manually and crafted each character's styling via Cinema 4D's hair tools–perhaps the most rewarding technical feat on a personal level.

What software or tools did you use for this project?

The total pipeline was Daz3d with Zbrush, imported and further refined in Cinema 4D, rendered in Octane, post in After Effects with editing in Premiere Pro. Each siren was built between Daz3D and Zbrush, so that I could sculpt out certain expressions or details that felt as organic as possible. Once I was satisfied and felt only hard-surface modelling needed to be added, I'd animate the figure in Daz before exporting OBJs and MDDs to import into Cinema 4D.

From there, I'd separate the figure's geometry out so I could further alter the sculpt in a non-destructive, clean process. Lastly, I had narrowed in my material library at the start of the project and would texture and light in Octane, alternating between lighter and darker palette extremes. The post-production was largely light for this, I really only used After Effects to add a couple lighting exaggerations and colour grade to a film-like quality. ‍

Are you currently experimenting with any new techniques?

This animation format wasn't necessarily new, I went with my comfortable OBJ/MDD workflow to integrate into Cinema 4D. However, since further modelling onto those imports can get tricky with geometry, I did utilize several deformer effectors to areas in the hard-surface modelling phase, which worked out quite smoothly! It allowed me to separate out different areas of the body and bring them forward or backwards into the skin while keeping the anatomy smoothly human with clean topology.

While the texturing and lighting were largely within my familiar realm of work, I did want to give a softer, film-like quality to the final piece, which resulted in studying an eclectic assortment of classic films primarily from China, Italy and Hollywood between the 60s and 90s. This also influenced the final colour-grading – avoiding pitch black or hot white tones as much as possible to maintain that dreamlike quality.

Did you work with anybody for this project?

I knew I wanted the visuals paired with eerie undertones in the music realm, but not so much so that the allure of it was lost. Mariode took this on and developed a wonderful execution of the score I couldn't be happier with. My partner, TJ Gonzalez, edited the scenes which paved the way for an abstract narrative that strengthened the core concept. I plan to collaborate with both again in the future and Seven Sirens is blessed to have had them.

What's next for you?

I'm working with an indie game studio, Aconite, on a mobile game called HoloVista releasing this summer. Alongside artist Andrew Morgan, a.k.a. Dreamfibre, we're developing 360 environments packed with an aesthetic labour of love. We'd naturally love for everyone to experience it themselves. On a personal level, I'm continuing to push into more experiential digital spaces through 360s I'm sharing on YouTube and low-key learning Unreal to see how that can enter my pipeline. Lastly, brainstorming the next short! All-in-all, we live in an immersive world and I'd love to give more meaningful experiences to those seeking it.