Stuart Lippincott is Enjoying the Ride as a 3D Artist 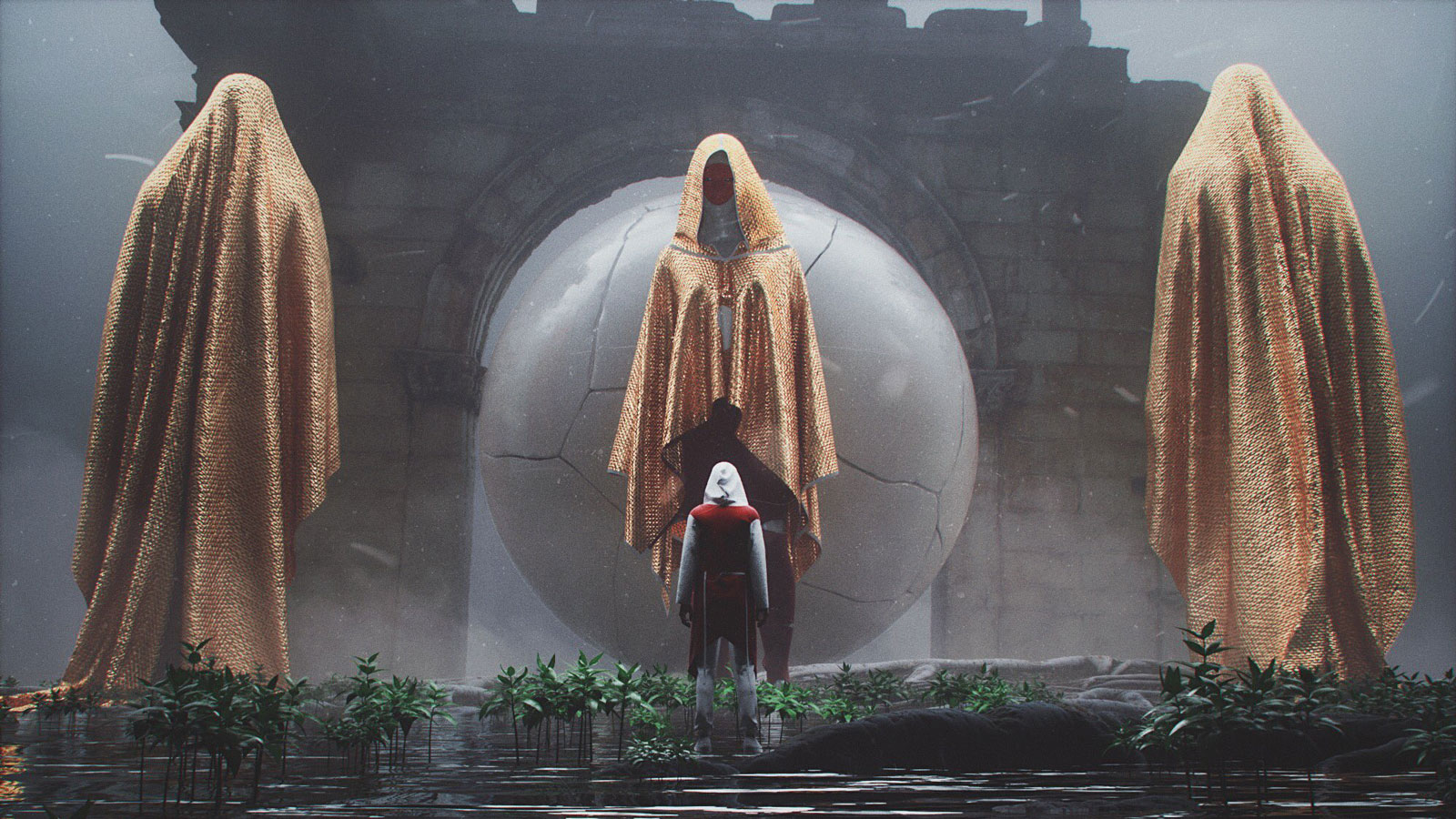 Stuart Lippincott reflects on his journey as a 3D artist as he navigates the changing digital world.

When Stuart Lippincott, who also goes by stuz0r, first jumped into his career in motion graphics in 2010, the industry was very different than it is today. One of the most glaring examples is that projects took far longer to complete than they do now. “Animating a one-minute video would take pretty much all weekend,” he recalls of basic 2D graphics in After Effects.

For a while, Stuart didn’t know exactly how he wanted to channel his passion for the arts into a career. He’s tried his hand in everything from music to photo and video, but 3D was the constant that stuck through it all. Before the ink on his degree in 3D design could even dry, however, he began working for a digital agency to create product-focused animations for the likes of Walmart, Sam’s Club and Hasbro. “They’d send me their 3D files and I’d animate them for promo videos,” he explains.

The experience was a very immersive one for Stuart, who constantly had to learn new skills on-the-fly. “I hate to say it, but I learned more working in a studio for a year than in pretty much four years of college,” he adds. That isn’t to say that Stuart is against school. Far from it, actually. Instead, he’s now mature enough to take a step back and realize that everybody’s journey follows its own trajectory – and it was no different for Stuart.

The first obstacle came in November of 2017, when Stuart was laid off from his job. The abrupt situation came about a month before his wife was scheduled to give birth, only adding more complexity to the matter.

After taking a brief hiatus to refocus, Stuart decided to brush up on his 3D skills. However, he quickly found out that he was jumping back into a world that had drastically changed since he first entered it. One where the rapidly evolving landscape of technology, knowledge and connectivity have provided more power and tools to digital artists than ever before. “Being out of the 3D game for so long, I was so used to everything taking like a month to do,” recalls Stuart. This motivated him to dive head-first into the new industry to learn software and GPU rendering. “That just changed everything,” he explains. “From there, I started doing tons of stuff for fun.”

“I make stuff where I think it would be cool to be there in person," he explains. "Like if you were a fly on the wall.”

The thought of bringing a moment to life from scratch was relaxing and stress-relieving for Stuart. So he undertook his own Everyday Project in an attempt to recapture that passion for 3D art. In posting his daily renderings to his Instagram, he saw the opportunity to monitor his growth over time and hold himself accountable for continuous learning. “For whatever reason, it just started snowballing,” says Stuart. “I just stuck with it.”

Stuart forged his own stylistic stamp along the way. Using primarily Cinema 4D and Marvelous Designer, his 3D creations are marked by mesmerizing futuristic concepts bathed in dramatic lighting and mysterious shadows. With each passing day, the Arkansas-based designer offers a glimpse into his digital sci-fi universe. “I make stuff where I think it would be cool to be there in person,” he explains. “Like if you were a fly on the wall.”

Years have now passed and he’s racked up an audience of hundreds of thousands, but Stuart continues to share daily 3D renders on his profile with the same dedication to improving his craft. He understands that the successful artists are the ones who are constantly trying new stuff and consistently evolving. It’s why he’s always looking to switch gears and not get stuck within his comfort zone. “It can be hard to humble yourself at first,” explains Stuart.

It’s a feeling everybody can relate to. Trying something new involves putting your ego aside and making mistakes – and in Stuart’s case, for the public to see. After all, your best work never comes within the first few attempts. At the end of the day, however, Stuart understands that acquiring new skills through experimentation is an invaluable mindset to have. “It’ll help you get better in the long run,” he adds. Even now, as Stuart is focused on various freelance work for clients, he looks at each new project as an opportunity to learn a new technique or experiment with a new tool.

As Stuart continues his artistic evolution, he admits that navigating the business side of things in the digital era is also still a work-in-progress. “Things have gotten so fast and people expect such a fast turnaround now,” he says. Throw in the complexities of an emerging market and rapidly changing technological landscape, and it's easy to understand why many freelancers encounter difficulties at first. Take the theme of perpetual licensing, for example. Stuart, who has created album artwork for different musicians, remains hesitant to transfer licensing rights with lifetime exclusivity. If you’re giving something away forever instead of a fixed time period, you have to account for every potential deal that would have occurred after that.

When you consider this, it’s easy to see why licensing digital art on a permanent basis costs astronomically more than deals that last just a few years. For Stuart, it’s a logical business move. However, Stuart has run into problems where potential clients don’t see it this way – and managing these back-and-forth discussions can become quite difficult and exhausting. It’s why Stuart finds comfort in setting up his AvantForm profile, where he’s able to configure the prices, terms and conditions on each individual design. His page acts as his virtual storefront, where he’s able to present his collection of digital designs to clients in an accessible manner. “Super easy and streamlined,” he adds.

Between his daily renders and constant flow of client projects, as well as balancing his family life, time remains at a premium for Stuart. This is especially true in an age where everything moves at a frenzied pace. By uploading his 3D illustrations to AvantForm, he’s able to leverage new and existing content, drive traffic to his networks and add another stream of income. Once he's uploaded his work on his own terms, clients can discover and purchase his work at any time – even when he's out to pick his children up from school.

“There’s only a certain amount of notes you can play on an instrument, but somehow people keep making new music."

There’s no denying that the landscape of technology has influenced the art world. While social media has brought us closer together than ever before, it can also be easy to feel as though it’s increasingly difficult to stand out in the art world. The key for young 3D artists, says Stuart, is to take advantage of these now-ubiquitous tools and create something “that doesn’t look the same as everybody else.” This is often far easier said than done, especially when everybody has access to the same programs and resources. “Back in the day, if you wanted to record a band, you had to have the amps in there, all the right microphones and everything else,” he explains. “Now I can record a decent sounding guitar track through my phone.”

It’s the ability to stand out from the crowd requires thinking outside the box. “There’s only a certain amount of notes you can play on an instrument, but somehow people keep making new music,” he jumps back in. As long as the creations come from an authentic place, they’ll always resonate with people. “Somehow it feels like people always pick up on that.”

This notion of helping others in the community is also why he takes a different approach to potential plagiarism. “It’s not hard to rip off the stuff that I do,” says Stuart. Instead of pouting about it, he finds the silver lining in the situation. “Hopefully I’ve inspired that person and they can take that style and branch out and make it their own.” After all, you’d be hard-pressed to find an artist who wasn’t inspired by their own idols and incorporated at least some of their elements – whether subconsciously or not.

While the thriving community has always been there, Stuart feels that the 3D world is only scratching the surface of its commercial potential. “It feels like the outside world is just now starting to pay attention,” he says. It’s not necessarily mainstream yet, but everyone from clients to the general public are starting to realize the limitless possibilities of 3D art. Although it’s easy to get wrapped up and excited for the opportunities down the line, Stuart is simply focused on his personal growth and sharing his 3D creations with his audience for now. Navigating the ever-changing digital world is something that certainly comes with its share of challenges, but he’s happy to be along for the ride.