The Surreal World of Filip Hodas 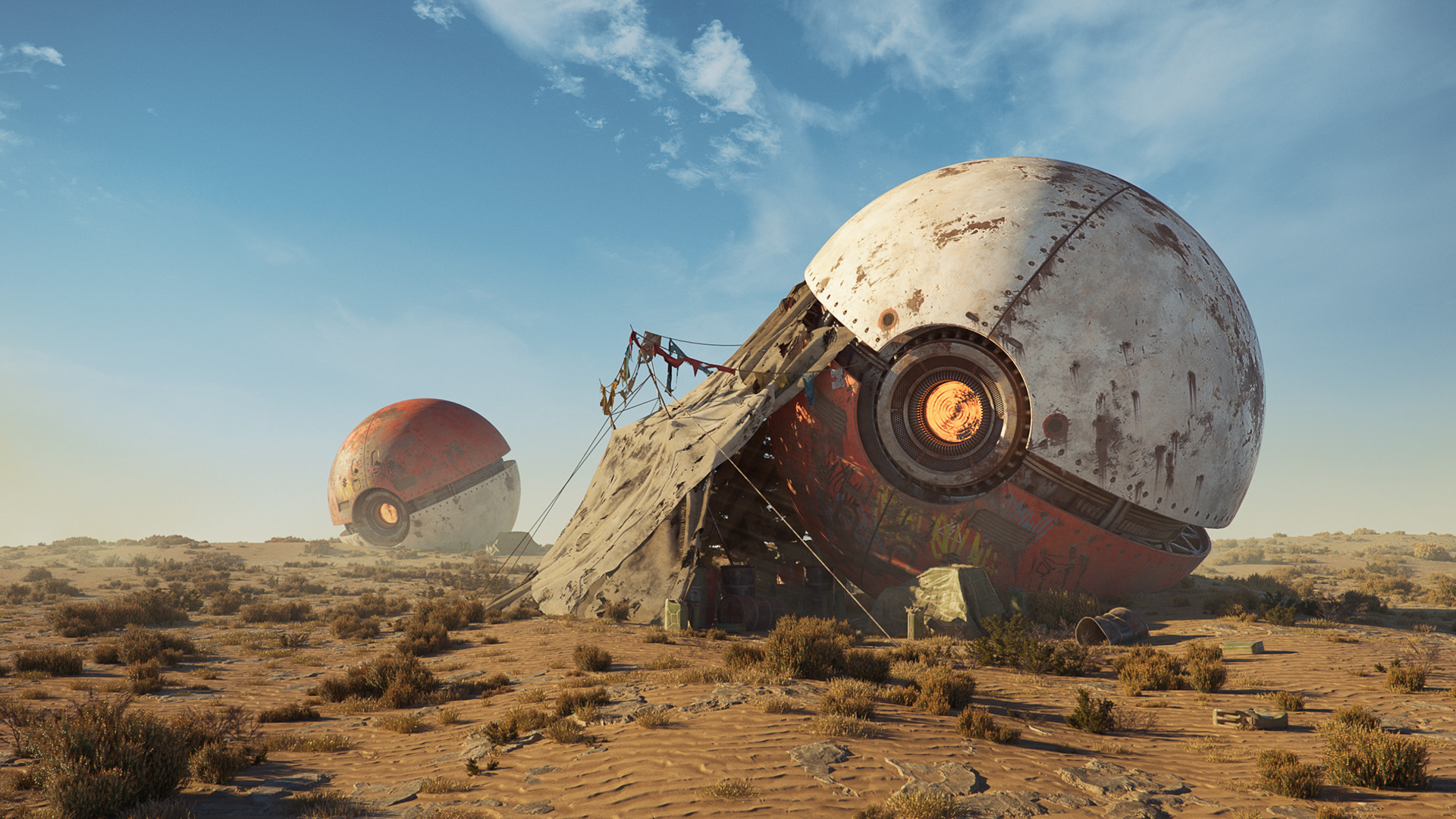 Filip Hodas shares his creative journey and why he’s prepared for the next move in his exciting career as a 3D digital artist.

Filip Hodas has made a name for himself creating surreal and atmospheric 3D renderings that give us a glimpse into an alternative dystopian reality. His captivating creations have a knack for grabbing your attention, often playing off well-known video games, cartoon characters, fast food chains and other recognizable pop culture imagery. From his viral Pop Culture Dystopia series to his impressive list of brand collaborations that spans the likes of Adidas, Coca Cola and Adobe, the Czech artist offers you an extraordinary glimpse into his digital universe.

The young designer has been sharing his artwork since 2015, working with programs like World Machine, Cinema 4D and Octane Render. His mind-bending creations transport the viewer into a hyperrealistic space, which have earned the Prague-based artist a loyal following over the years. In fact, Filip recently surpassed the 500,000 follower mark on Instagram, an indication of his meteoric rise to prominence, but it wasn’t too long ago that he was simply working a nine-to-five job and posting his creations to social media for fun.

While the Czech Republic may seem like a small and obscure Eastern European country to many, cities like Prague have earned a reputation for their electrifying drum and bass scene. It’s within Prague’s music scene where Filip began making a name for himself as a self-taught graphic designer, supplying posters to local nightclubs, artists and concerts. “At one point, I was literally supplying half of the drum and bass scene in the Czech Republic with posters,” he says.

The work was steady, but Filip unsurprisingly approached a creative ceiling pretty quickly. “I felt like I wasn’t really moving anywhere with the graphics,” he says. “There are only so many things you can do with basic illustrator and photoshop workflow, or using photos of the artist and putting some sci-fi flourishes over it.” Filip felt that the concert posters were comparable to clip art – very basic and limited when it came to typography or effects – when he stumbled across the work of a few 3D designers who weren’t working for movies or video games, but rather creating still images and animations for the joy in it. So he decided to try his hand at producing abstract 3D shapes to “elevate the posters a bit and do something different.”

“I really enjoy creating something that looks real, but definitely isn’t real, and it wouldn’t be possible for it to be real."

At the time, Filip was working as a graphic designer in Prague and he quickly discovered that the world of 3D came with a steep learning curve. In an effort to get acquainted with the basic techniques and tools, he decided to create and post a 3D rendering to the web each day. “I was working from nine to six,” he recalls. “I would get something to eat after and then I would work until like 2AM on my personal clients and dailies.” In aimlessly “building up skills here and there” with new programs, the young artist stumbled across his own visual language, while the consistent posting allowed him to slowly grow a social media following over time.

Rather than photographs, which are limited to what’s readily available in front of you, Filip’s hyperrealistic artwork is a little different. “I really enjoy creating something that looks real, but definitely isn’t real, and it wouldn’t be possible for it to be real,” Filip explains. He’s drawn to the idea of constructing his own world and the rules that govern it – and the world of 3D proved to be a match made in heaven.

Filip primarily considered his daily renderings as a journal for artistic growth, so he wasn’t really thinking about what he was sending into the digital universe. One day, however, he received an email from a high-end advertising agency in New York about a daily rendering that he uploaded a few months back. It wasn’t anything too complicated – he had created an exploding crystal with a fizzling metal trail and uploaded it to Instagram without expecting anything more than some likes and comments. “It wasn’t even a nice image,” he laughs. “I didn’t really like it, to be honest.”

The agency wanted to license the animation for a skyscraper billboard for IBM, leaving Filip in utter shock at his office desk. “I had no idea what that even meant,” he recalls. He was ecstatic when they offered him a whopping $300 for commercial use of the rendering. “It was kind of funny because I had no idea how much these things cost,” he admits.

While Filip was still in the midst of his celebration, the representative sent him another message apologizing for the typo and restating that the offer was actually for $3,000, sending him to the moon and back. “I was dancing around the office for like fifteen minutes,” he exclaims. “That was the moment for me.” Licensing his personal work for the first time was an event that brought heaps of clarity and confidence to the young artist, pushing him to aspire to transition from simply “scoring some likes” on Instagram to making a full-time living as a 3D digital artist.

Again, the transition to Filip’s next chapter as an artist didn’t come without its struggles. As a new entrepreneur, he had to learn how to effectively straddle the line between personal  creativity and business. From the licensing and negotiations to the cryptic legal contracts, it’s not hard to see why the process could be overwhelming at times.

One of the very first problems he encountered was the pricing of his artwork. When a potential client is interested in your work, where do you even start? Underprice and you might feel like you’re not getting what you’re worth. Yet you don’t want to overprice and scare away potential business. “When I was doing posters in the music industry, for some reason, the graphic is like the last department where they want to spend money,” Filip explains. “Even if they paid $10K for a one-hour set of the artist, the artist is going to pay $200 to the graphic designer, who spends a week designing the poster for the show. So I was taught to expect very low budgets all the time.”

Instead, he began looking to various resources and tools from around the web. He would look to calculators found on stock footage websites just to gauge the pricing of an image and get an idea of what to charge. “When this IBM thing happened, I didn’t even do any proper research,” he admits. “I tried to Google something and found a couple articles for hand-drawn illustrations and book covers, but it was all pretty irrelevant.”

But one of the lessons he’s learned along the way is that personal opinion doesn’t necessarily determine the worth of a design. Within the subjective world of 3D artwork, where unique style and authentic personality is championed, potential clients are much more concerned with the bigger picture of the project. He eventually came to the conclusion that his pricing shouldn’t necessarily stem from the amount of time spent on a project, but rather “how much value it will bring to the client.” For each new inquiry he received, he devoted more and more time to researching the interested party. “If it’s a company that’s making $20 billion a year, obviously I’ll license to them at a much higher rate than your average mom and pop shop from around the corner,” he says. “That’s the part I hate the most – the negotiation and pricing of the work.”

He’s taken this learning on-the-fly approach to various other problems as well. From dodging bait-and-switch tactics to establishing clear communication, he’s been refining his process every step along the way. But jumping through all these hoops just to (potentially) make a sale can be all-parts frustrating, confusing and overwhelming. “It ends up taking loads of time,” he adds. And it isn’t particularly enjoyable either. It’s part of the reason why he was so drawn to AvantForm as an all-in-one solution when it comes to contractual work, communication, pricing and negotiation. “I don’t have to spend hours of time stressing myself with crazy mathematics,” he laughs.

Another important allure for Filip was the high curation standards when it comes to the artists and media database. He’s long been turned off by the thought of uploading his artwork to stock footage websites, which are usually driven by sheer quantity rather than quality. It’s something he learned during his time as a graphic designer. “A lot of the time, we would have to sift through loads of crap just to find a half decent image,” he explains. “And generally, it’s not very different.”

Uploading his intricate 3D artwork and having it sit next to the hundreds of thousands of cookie-cutter images that fill up most stock footage websites doesn’t make much sense. Filip would run the risk of his one-of-a-kind renderings being drowned out and lost within the shuffle of cookie-cutter photos. The careful selection process behind AvantForm ensures that the media database is free from any fluff and filler, allowing each artist to stand out with their own visual style. This allows artists like Filip to simply be themselves and upload work without forcibly trying to appeal for clicks. After all, it's his distinctive visual language, in which he's spent countless hours and resources cultivating and perfecting, that got him here in the first place.

Life seems to have slowed down for Filip and, as always, his focus remains on elevating his craft. He finds himself at a point in time where he’s once again ready to make the next jump in his career as a 3D digital artist. When it comes to scaling his trade and leveraging his skills, he now understands that licensing, negotiation and communication play a crucial role – even if they may not be the most glamorous of tasks. Having AvantForm as an official entity in front of his artwork will not only ease his burden and save valuable time, but it also lets him focus on what he does best – create.